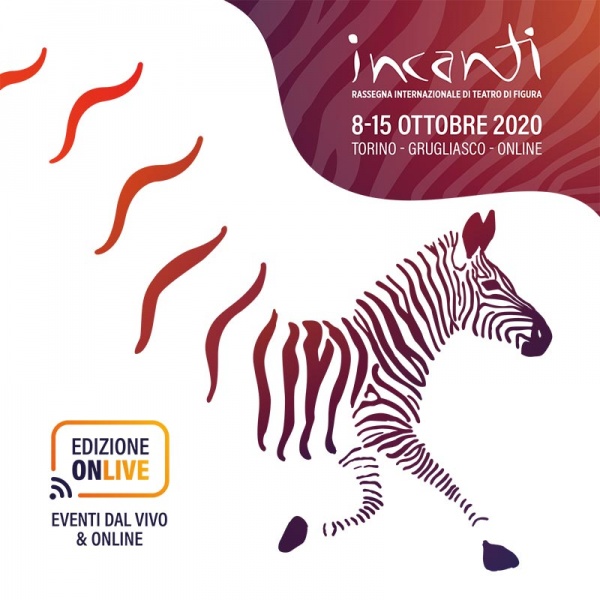 This edition of INCANTI International Puppet Theatre Festival 2020 will not be the XXVII one, as it should have, but a special edition without numbering, ONLIVE, that is, with appointments live and online or both.

The artistic direction has decided to tighten teeth, make good face to bad game and since the confinement has sought ways to preserve and reinvent the Festival, now one of the veterans in the European scene as for Puppet Theatre.

Thanks to the project Incontra Incanti the festival shape has been discussed and rethought with public and artists and thus the 2020 edition has been defined. The main changes decided for this special edition, besides postponing most of the foreign companies to the next one in 2021, have been to develop the program beyond the festival’s period of one week, in order to fulfil the project Spanish Puppetry at INCANTI -with the support of the Spanish Ministry of Culture- and
to organize distant participations offering glances, in several ways, of Puppetry “Behind the Scenes”, through a series of appointments online.

As to the live program, INCANTI 2020 opens with the show Waterpeace, born at INDA (National Institute of Ancient Drama in Syracuse) as a social&art project from a group of students and graduates and adapted for this INCANTI special edition with the extraordinary participation of Moni Ovadia and the shadows of CONTROLUCE Shadows Theatre, the company organizer and founder of the festival since 1994. The inauguration will take place at Teatro Astra, with the collaboration of TPE (Piedmont Europe Theatre). The live program continues with two premieres of very Italian Puppetry protagonists: Is Mascareddas with a new show by Tonino Murru and CONTROLUCE Shadows Theatre with a performance inspired at Giorgio De Maria’s book “The Twenty days of Turin” specially designed and played by the writer’s daughter Corallina De Maria. Some other events complete INCANTI’s program this year, partly live and partly online: Cantiere, Behind the Scenes, Meet Incanti, online masterclasses by Agnes Limbos and Ariel Doron and the installation A Tribute to Rodari.

Despite of difficulties, this special edition is taken place thanks to the institutions that support INCANTI from long ago: the Ministry of Heritage and Cultural Activities and Tourism, Piedmont Region Council , City of Turin Council, the Company of San Paolo, the CRT Foundation, the Municipality of Grugliasco, the Foundation “Teatro Ragazzi e Giovani ONLUS”, TPE and the National Museum of Cinema.

Incanti 2020 offers us a special edition that will take place from 8 to 15 October. The analysis on the theme of the journey (viaggio) started in 2018 will end this year. Journey understood as a path of knowledge or real travel that allows a programming related to contemporaneity. The artistic direction chooses some online events to experiment with new forms of theater making, welcoming the proposals of all involved subjects, as well as to narrate from within Puppet Theater in its being and doing. Changing means and surfing the net.

The whole training design of Incanti is rethought in the light of the contemporary and imagined dialoguing more than ever with new languages. Thus the project Cantiere is declined starting from the linguistic elements that will be used and make dialogue. The whole teaching, if it can not be realized in physic presence, it becomes in the distance a way to imagine a theater that makes from that distance an expressive element and not just a fallback.

These are important initiatives that make us proud of the courageous attitude of the cultural operators in our city. For this will, as well as for the positive value of the proposal, I thank the artistic direction of the project, along with the wish that, even this year, despite the difficulty, it receives the success it deserves.

The 2020 edition of the Incanti Festival, which was supposed to close the three-year survey on the theme “The Journey”, in all its possible variations, remains faithful to the theme but transforms it into a metaphorical journey inside the Puppet Theatre itself, trying to rethink the emergency in a propulsive way.This becomes an opportunity to go to spy behind the scenes, to understand where and how the magic of the Puppet Theater happens.

Incanti, an International Festival of Puppet Theatre now in its 27th edition, has always been a melting pot of ideas and projects, as well as of authors and artists among the most established of the contemporary cultural scene.

Born in 1994 thanks to the Piedmont Region, dedicated to puppet theatre, shadows, objects and visual theatre and aimed at both adult public & children, the festival will find in this new edition a rich and heterogeneous program with a extremely contemporary language which communicates, in all its complexity and contamination, with all the current performative languages and with the present.

Councillor for Culture, Tourism and Comerce of Piedmont region council

Do you want to see new edition of Incanti?