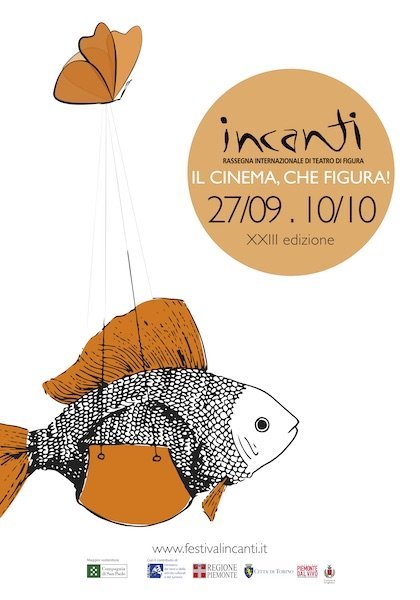 The twenty-third edition of INCANTI is dedicated to the relationship between puppetry and cinema. Companies from Denmark, Belgium, Spain, the UK and Italy are confronted with the themes and techniques of cinema and the image in general, including video and photography. Also the PIP, directed by Agnès Limbos, one of the most important names of the Theatre of Objects, is dedicated to the creation of a theatrical feature film. CANTIERE, the festival space dedicated to emerging Italian companies, focuses attention on a blend of languages ​​and techniques of puppetry and cinema. The Academy Project, started last year with the Ernst Busch Academy of Berlin, this year presents two shows created by students of the National Academy of Dramatic Arts Aleksander Zelwerowicz of Warsaw; the Academy teacher Magdalena Kiszko-Dojlidko holds the workshop of Shadows Theatre at the Castello di Rivoli Museum of Contemporary Art. The section Around Incanti includes, among other events, an open discussion with four exceptional personalities about international innovation in Figure Theatre , in collaboration with the Puppet Museum of Villa Boriglione, UNIMA Japan and UNIMA Italia; an introduction to Bunraku theatre in collaboration with Turin’s MAO (Museum of Oriental Art) and UNIMA Japan; an evening devoted to the animation master Kihachiro Kawamoto, in collaboration with the Kawamoto Museum of Iida and the National Cinema Museum of Turin. New partnerships have been opened this year with the Academy of Fine Arts of Turin, who oversaw this editio’n graphic image, and the platform Officine Sintetiche for a step of the Apnea project.
Many thanks to the sponsors that make INCANTI possible: MiBACT, Piedmont Region, City of Turin, Compagnia di San Paolo, Fondazione Live Piemonte dal Vivo and City of Grugliasco.

The project of CONTROLUCE Association for Incanti 2016 confirms and, if possible, accentuates the features that make of Incanti a festival of international significance deeply rooted in our country and in the cultural fabric of Turin and Piedmont: the great level of international guest companies from four countries, plus Italy; the production projects; the special attention to young people, articulated on the double side of the project Cantiere, with the exhibition of young emerging companies and the hospitality for the students of the Academy of Warsaw, and training, with a workshop held by the same Academy teachers; the extension of collaborations with a number of important cultural institutions of the territory and concomitant attention to the schools public.
Meeting place for the most important European companies, the XXIII edition of Incanti is dedicated this year to the relationship between cinema and puppetry, result of a constantly growing work, carried out over the years.
Indeed the cinema finds in our region one of the most fertile and attentive territories and the meeting of the two arts proposed by the Association Controluce can only bring additional lymph and cultural ferment to a landscape of excellence.
The festival has always been attentive to the European and international research, proposing the most interesting outcomes of creativity and innovation that cross the field of puppetry in the world. Also in this edition confirms its leading role among the international festivals of the field. The Piedmont Region, in performing its institutional role of support and promotion of culture, stresses how Incanti, with its activities and art project, is an important element of improvement and cultural development of the territory.

The twenty-third edition of INCANTI Festival is a great opportunity that enriches the cultural offer of our city. INCANTI this year is dedicated to the relationship between cinema and puppetry, and allows to know the theatrical projects of foreign and Italian companies.
The rich program of performances is declined again within a path of high international profile educational opportunities and support for young companies that have distinguished themselves in the panorama of the Puppet Theatre, thanks to PIP – Production Incanti Project, and the fifth edition of the CANTIERE project.
The indisputable quality of the programme, the strong commitment to research in the field of theater, the European partnerships and solid relationships with local agencies and institutions, enriched this year by additional new partnerships, emphasize the quality and prestige that have over time increased the role of this event.
We thank the Association Controluce Teatro d’Ombre, whose vast experience and expertise offers the opportunity to acquaint citizens with the excellence of Italian and European puppetry.

Do you want to continue discovering Incanti Archive?

Look at the other editions