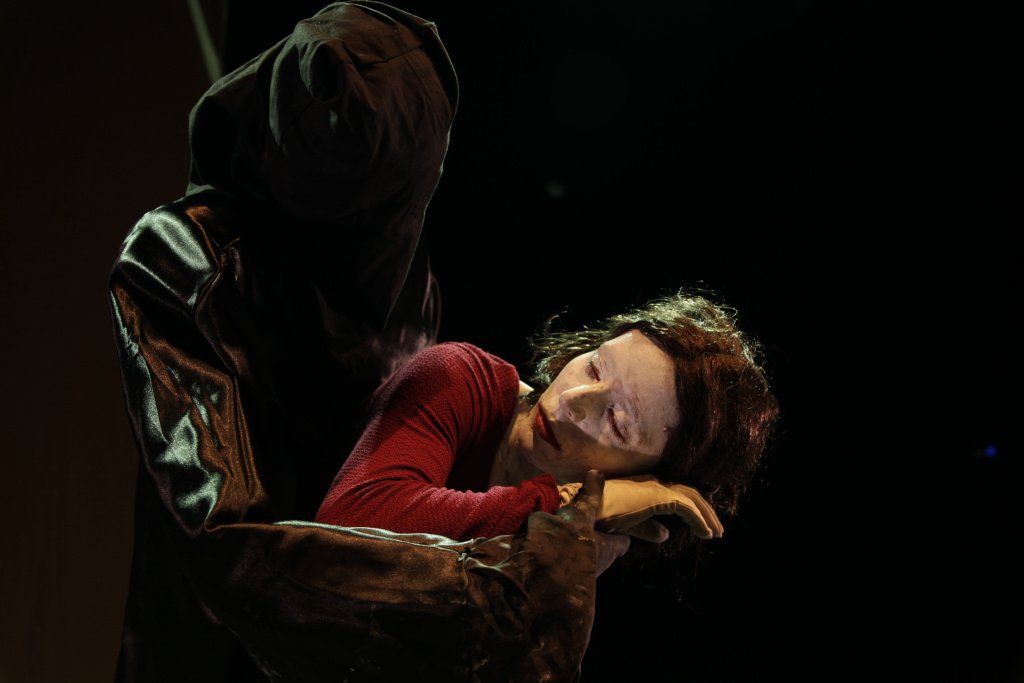 The show revolves around two figures: that of a creature covered in black, with human features, inhabiting a nocturnal and inner place and that of a woman, immersed in a deep sleep, which would seem infinite. Then, in a hint of alarm, the black creature emerges: there are traces to follow and voices near and far, mixing together. Among these, a music: it is a music that invites to dance, like the incessant flow of life.

On stage only one actress. You have the feeling of watching a show with two performers, in reality everything happens thanks to one person. The puppet animates the actress. Or rather, the actress animates the puppet that animates her. It is from this vision, and from all that it is capable of evoking, that the show begins. The intention, the desire and the bet: to put life in the condition of being observed in its being and not-being, in its flow and in its lack and, together with the viewer, to live this change thanks to the illusionistic and artisanal power of puppetry instruments.

RISERVA CANINI established in 2004 by Marco Ferro and Valeria Sacco. The company investigates the relationship and interaction between the actor’s body and the figures in their multiple forms (shadows, puppets, raw materials, objects, mannequins, etc.) They have received the Eolo 2014 Award for Best Company “for having been able to renew the language of Puppet Theatre in Italy”.
Talita Kum debuted in its final form in Modena in 2012, at the festival Trasparenze, Atelier of the Contemporary Scene, winning the award for Best Show. Since then the show has been replicated in theatrical seasons and festivals in Italy, France, Spain, Portugal, Romania, Bulgaria, Turkey, Colombia and Indonesia winning numerous other awards.