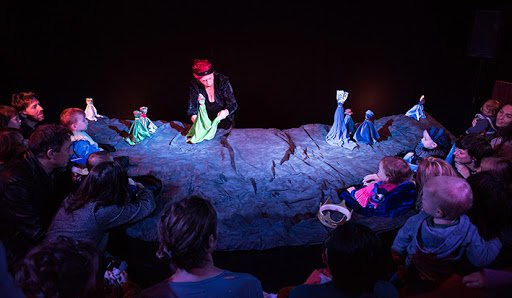 with the support of Wallonie-Bruxelles International

in collaboration with Fondazione TRG onlus

A show event in old English for babies and families. A free interpretation of Shakespeare’ universe: Romeo and Juliet, Macbeth, A Midsummer Night’s Dream, King Lear, come to life in the adults’ minds, while children become the protagonists of a narrative play, playful, poetic and musical. Based on the feelings and moods of present children, short scenes will be told involving the little actors/spectators.

A theatre of actors, objects, dialogues and music, where the actress, on the stages for more than 30 years, navigates between play and narration, between incarnations and points of view.

The company Gare CENTRALE was founded in Brussels in 1984 by Agnès Limbos, it is mainly dedicated to the creation, distribution and production of object theater shows for young and all kinds of audiences. To date it has more than 3500 replicas presented in different parts of the world. Agnès Limbos has developed a personal approach as an actress-theater artist. Through his shows, and his collaborations seeking to create a popular theatre of quality, full of emotions, based on the contradictory understanding – fiction/reality, tragedy/comedy – of the universe, and based on the strength of the instinct and on the search for a visual language, and physical, in continuous evolution.